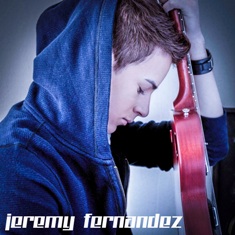 New York, NY — After years as a young, accomplished actor, 15 year old Jeremy Fernandez put out his first two singles in 2012-13 to great acclaim and thousands of radio plays. On August 20, he will release his third single, “Don’t Let Go,” featuring Cymphonique.  Currently working a new indie film, “Little Miss Perfect,” this multi-talented pop sensation is poised to top the charts and create even more “J-Dezers,” his adoring fans.

“I loved recording this song. Having Cymphonique in the studio was awesome. The song has a great dance rhythm and just a bit of dub step to drive the beat. I think my fans will love it and that I will find lots of new fans and friends.” — Jeremy Fernandez

Jeremy’s first two singles, “Miss America” and “Point â€˜Em Out,” were incredibly successful. That has created a huge anticipation for this third single.

“ Jeremy Fernandez . If you haven’t heard that name yet, get ready, because he’s the next big thing that will be treating your ears.” — Fanlala, March 7, 2013

As an actor, Jeremy appeared on many TV shows and indie films from “Law & Order,” “The Electric Company,” and “Team Toon.” His acting career has included working with some of television and film’s greatest actors and creators.

Jeremy Fernandez was born on December 18, 1997 in the Bronx, New York. He began his acting career in 2009 and is presently filming an independent movie, “Little Miss Perfect.” His first two singles were released in late 2012 and early 2013. His next single “Don’t’ Let Go” will be released on August 20. His first album is expected later this year.

“I have very big dreams and I’m looking forward to every success I earn along the way. I really want to be known for my music and the feeling I give people, which is to relax, let go and just have fun.” — Jeremy Fernandez

For more information about Jeremy and to listen to “Don’t Let Go” single visit his website at http://www.JeremyFernandez.com or follow him online at twitter.com/JeremyFernandez

View the Official In Studio video with Jeremy and Cymphonique on YouTube at http://www.youtube.com/watch?v=KW9RMhcmpm0

If you would like more information about this topic, please contact Jessica Sternick at 212-563-7575 or email at [email protected]